The Tetra Interface and Version 0.02

Sorry for the lack of posts in the last couple of weeks.  Getting the first release of Malise and the Machine out pretty much consumed all of my time, but in the past few days I've been able to get to work on determining necessary changes for V0.02, as well as hash out the design for a new battle menu interface.  Check out the following post I made on Patreon this morning for the details on what to expect in the next version!

INCOMING ESSAY A.K.A. SUPER WALL OF TEXT (Don’t ever say I don’t keep you updated!!!)

I mentioned a few days ago that I've been in the midst of designing a new interface, now dubbed the ‘Tetra Interface’ that will simplify using commands, skills, and items in battle, as well as give some direction to the game's skill system.  I've decided that implementing this system will be one of the main objectives of V0.02, and after three days and nights (maybe? I have no idea what day it is) of furious design fueled by the new ‘The Prodigy’ album I'm ready to present the basics of it as well as other plans for V0.02.  Note that the preview battle image is completely smoke and mirrors (it was done in Photoshop... actually implementing it will take quite some time).

The Tetra Interface revolves around groups of four icons, called “tetrads”.  Each icon is called a “tetra glyph”.   A tetrad houses glyphs of similar type, and the different tetrads are basically simplified versions of what were previously menus in the battle system.  Each character will have a Command Tetrad (Attack, Guard, Skills, Items), a set of Skill Tetrads, and an Item Tetrad.  Once safe zones are introduced into the game, the player will be able to equip and customize glyphs into the characters’ tetrads via either changes to or new windows in the menu.  For V0.02, they will come pre-loaded.  Eventually, a character will have a Skill Tetrad for each weapon type, for which they can swap out at will in battle with the ‘W’ key.  In addition, the outfit type that the character is wearing will affect what tetra glyphs can be equipped, thereby acting almost like a class.

The new interface makes for quite a few changes to battle, all for the better in my opinion.  A big gripe was that it was tough to navigate the menus during the madness of battle, and would be even tougher once more skills and items are added.  With the Tetra Interface, every skill or item can be accessed with *at most* 2 key presses.  Basically, a glyph is selected with the arrow keys/directional pad.  Up selects the top glyph on the currently active tetrad, left selects the left, and so on.  Once you know the positions of the glyphs (which you should, because you will be setting them), you won’t even have to look at the tetrad to see what you’re doing.

Now is probably a good time to refer to the battle preview image: 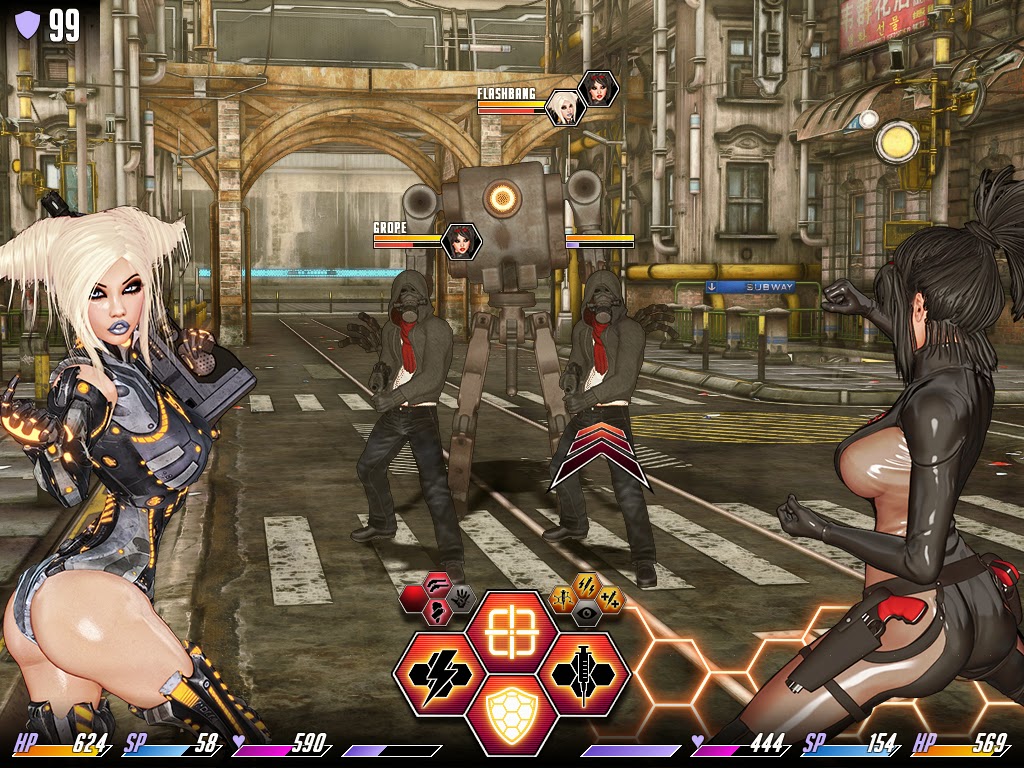 When a character gets a turn, the orange Command Tetrad appears (just like the command window previously appeared).  To access the Skills Tetrad (color depends on character and outfit type), it is by default left on the Command Tetrad, while the Items Tetrad (gold) is by default the right glyph.  Additional major changes to the battle controls include that ‘Attack’ can be accessed at any time during a character’s turn by pressing ‘Z’.  Likewise, ‘C’ will swap to the other character if her ATB gauge is full, and even more importantly holding ‘Shift’ will Guard.  Guard will no longer require a turn to use, and it will also have an impact on blocking H skills (I haven’t decided on the extent yet).  There’s however a cost for guard which will keep you from perma-holding Shift, which I’ll get to in a bit.

You’ll see in the battle preview image that miniature versions of Malise’s Skill Tetrad (red) and her Item Tetrad (gold) appear next to the Command Tetrad.  I actually just added this concept, with the idea being that you can see what’s currently available for use, as well as what is on cooldown (yes, this system will allow for the possibility of cooldowns on certain powerful skills and items).  My plan is to make these optional, as they are a bit much to look at for a new player, but I could see an advanced player wanting this option.

And now is probably a good time to check out the pretty glyphs: 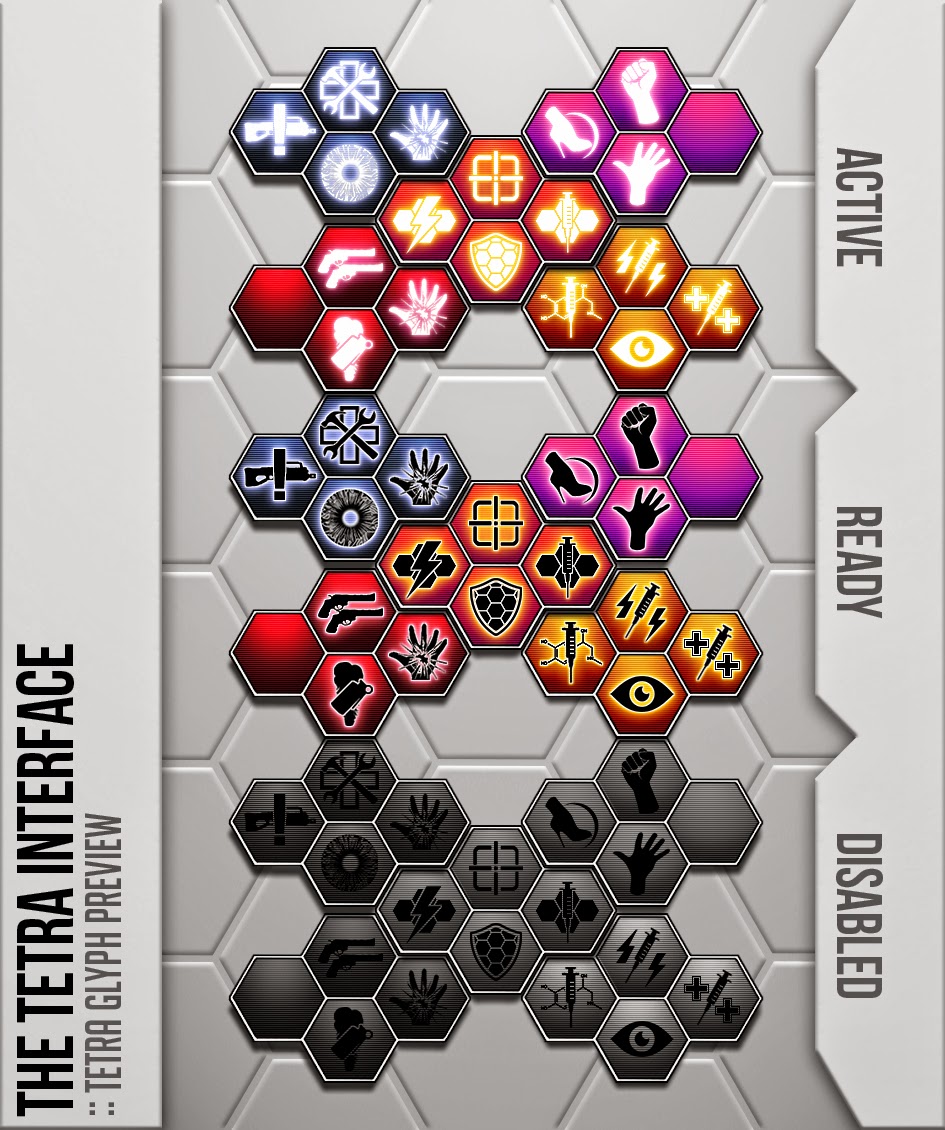 Time to drop another bomb on ya.  The SP system is changing up in a big way.  If you’ve played recent ‘The Elder Scrolls’ games, it’ll make sense.  The big thing is that SP will regenerate over time in battle, and will be much more of a fluid commodity as opposed to something you have to refill with items every few turns (that would just get dumb once the game gets more advanced).  Remember I mentioned that Guard has a cost?  Well, whenever you hold Shift to guard, SP regeneration will stop.  You’ll also take a hit to your SP whenever you successfully guard an attack, so it must be used wisely.

WE’RE ALMOST FINISHED (not really).  Check out that battle preview image again.  Notice the sweet mugs of Malise and Neon beside the parameter bars for those baddies.  The idea is that you’ll be able to see who an enemy is targeting with a skill, meaning you can better determine if you want to take defensive action or possibly interrupt the skill.

Lastly, you’ll notice in the upper left corner a widget depicting Neon’s armor health.  This component still has some design to work out, but basically the character’s outfit becomes vulnerable once they reach a certain level of lust sickness (the level depends on the outfit).  I’ll probably make a post exclusively about the armor damage system once the kinks have been worked out a bit more.

A page and a half later, and I think I’m finally done.  Refer to the following lists for full details on planned changes for V0.02 and features of the Tetra Interface.

In V0.02 the Tetra Interface will introduce:

Planned features of the Tetra Interface beyond V0.02:

Also, word is you guys liked the music in V0.01.  Thanks!  It was all done by yours truly!  I’m working on summoning some even more insidious co-conspirators from the electro/industrial/metal realm to contribute to the soundtrack, so it should be pretty badass when it’s done.